Stevie arrived at Dogtown SA as a stray when he was around a year old. From the very beginning, he was outgoing and sweet with both people and other dogs. His new friends at the shelter figured it wouldn’t be long before he found his forever home — but unfortunately, that wasn’t the case. 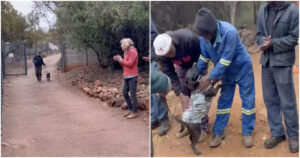 For six years, Stevie was passed over again and again, and no one was ever really sure why.

“[It] was always a mystery to us,” Elanza Kloppers, the adoptions manager at Dogtown SA, told The Dodo. “Stevie met lots of potential families, but for some reason, another dog was always chosen. Many of his roommates got adopted through the years and we were always hoping that something would come along for Stevie. Being a black dog also didn’t help, as it’s quite common for black dogs to be overlooked in shelters.” 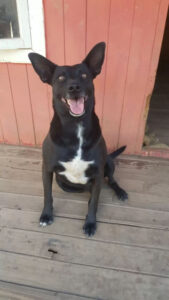 Despite the long wait, Stevie and his rescuers never gave up hope that his perfect family was out there somewhere — and they were right.

“When I finally got the news from the adopter that Stevie was the one, I could not wait to give the team the news,” Kloppers said. “They were overjoyed! Finally, it happened for our boy. We have all been hoping and praying for so long! I also let our volunteers know immediately, and they could not believe the news. Everybody was so happy for Stevie. It was beautiful to see.” 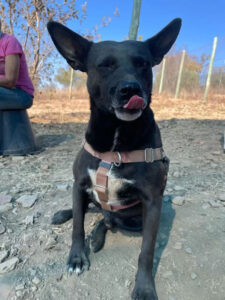 At long last, someone decided that Stevie was the perfect dog for them, and the staff quickly began preparing to finally send him off to his forever home. Since he’d been at the shelter for such a long time, everyone who works there had come to love Stevie like their own dog. They really wanted to do something special to honor his time there and celebrate his next chapter, so on his last day, as he headed out to the car, everyone at the shelter lined up to say one last hello and goodbye to their beloved Stevie. 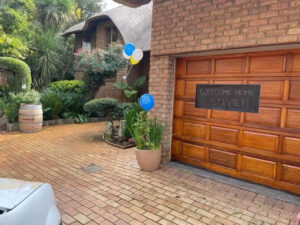 “All our adoptions are special, but some are just beyond special,” Kloppers said. “Through the years we have had one or two adoptions which really stood out, and for those dogs we have always had a special farewell. The team all wanted to say goodbye to him and wish him well.”

As Stevie made his way down the line of his cheering friends, he was so excited. He seemed to know that it was a special day, and was so happy that all of his friends had come out to see him off. For Stevie, it really was the best day ever.

“Stevie wagged his tail and said a special goodbye to everyone,” Kloppers said. “He has come to love our team so much and I think he couldn’t believe his eyes having all his favourite people together, just wishing him well and cheering him on. It was quite an emotional day for all of us. Stevie jumped into the vehicle with his normal, wiggly bum as if he knew, finally, his day had come! Warm in his favourite jacket and surrounded by his favourite people, he hopped into the vehicle quite happily.”

Stevie is now all settled into his forever home, and so far, he’s absolutely thriving. His new dad calls him Stevie Wonderful and absolutely adores him, and it’s clear that Stevie already loves him just as much. They go everywhere together and can’t wait for so many more adventures to come. It may have taken a while, but Stevie has finally found his happily ever after, and the entire team at Dogtown SA couldn’t be more thrilled for him.