A golden retriever puppy born without a front right paw has found her forever home with the Minnesota family of 7-year-old Paxton Williams, who had to have his right leg amputated three years ago A puppy born with three paws has found her forever home with a Minnesota child with a prosthetic leg.

According to CBS Minnesota, the golden retriever named Marvel was the only one in her litter born without a front right paw. She’s since been taken in by the Williams family in Waconia, whose 7-year-old son, Paxton Willams, had his right leg amputated three years ago.

“When she was born, we knew right away she had a special purpose,” Felt said. “We wanted her to go in a home with someone who had a limb difference.”

Paxton was born premature, acomplicatio that caused the boy to develop an infection in his right leg, which stunted the limb’s growth. Three years ago, Paxton’s parents made the difficult decision to have the boy’s right leg amputated and replaced with a prosthetic limb. “It gives him the opportunity to tell the kids, ‘Oh, she’s missing a paw, she’s like me,'” the mom explained. “And like it gives him that voice, too, to advocate for himself.”

Blaine, Paxton’s father, has also been moved by seeing Paxton and Marvel enjoy walks together on trails near their house.

“It’s like they knew they were special,” Blaine said.

“The amount of emotions that were running through me at the time,” he continued. “It was just awesome because it was knowing that she was in the perfect place at the perfect time.”

Marvel might need a wheelchair or prosthetic of her own as she grows larger and gets older. The family hopes that Paxton will someday be able to run with his prosthetic and that Marvel will be there to run beside him. 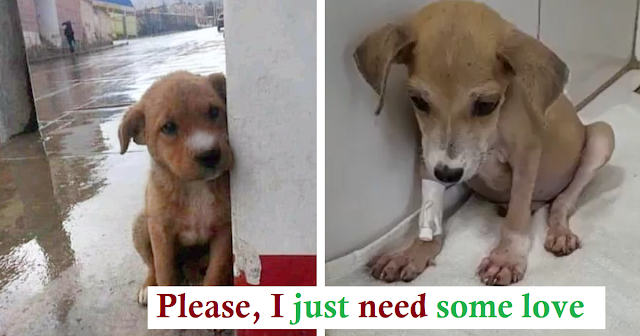 She Hid Against The Wall, Only Dared to Look At Everything From Afar, Wished for Once to Be Loved