Graduating from college is a huge accomplishment.  All the hard work has finally paid off and it’s a symbol of great things to come.  As this graduate student accepted her diploma, her service dog also got a degree in special recognition for helping her all along the way.

As Brittany Hawley graduated from Clarkson University in New York City with a degree in Occupational Therapy, her service dog GRIFFIN (spelled in all caps) was by her side, as he had been every day of her student life.

What the 4-year-old Golden Retriever didn’t know on the first day of school was that one day the university would also award him an honorary degree and honor him with special recognition for all his hard work and service!

The Board of Trustees agreed to the unconventional degree based on GRIFFIN’s “extraordinary effort, steadfast commitment, and diligent dedication to the wellbeing and student success of his owner Brittany.”

“GRIFFIN has been awarded an honorary diploma for his extraordinary contributions to student success,” the university said.

The cute dog looked so proud accepting his degree wearing his cap and gown alongside his owner.  He certainly deserved the special honor the school gave him for all his service and dedication to Brittany.

In a press conference, the school said: 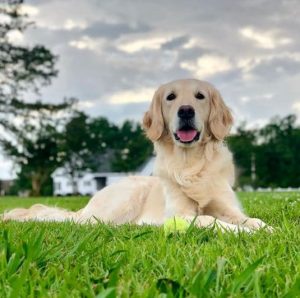 Hawley got her service dog after a diagnosis of complex regional pain syndrome at the age of 16.  The syndrome causes her muscles to contract uncontrollably and causes affected body parts to twist involuntarily.  She is often in a lot of pain and her legs are affected.

She was approved for a service dog by paws4peolple on the exact same day she earned an interview at Clarkson.  GRIFFIN and she were meant to be!

“We moved to New York together, we started school together and we finished together,” Hawley told CBS News.

Please share their great story with your family and friends.