In many ways, Goliath and his three brothers are very much alike. They’re all cuddly, fluffy and deeply loved by the rest of their family.

But there’s one thing in particular that sets Goliath apart: his brothers are all dogs and Goliath happens to be a calf! 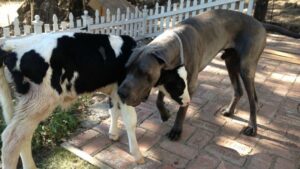 Goliath was born on a dairy farm and was meant to be sent to slaughter when Shaylee Hubbs and her family stepped in and rescued the poor little calf and brought him home to their ranch in Danville, California.

There, Goliath soon befriended the family’s three friendly dogs. In fact, he bonded so much with his new brothers that he started to believe that he, too, was just a big pup.

“He was raised with our three dogs, and he’s around them every day. They chase and play together, he watches how they eat their dog food and drink water from their bowls and copies them and he even lays in their dog beds. He even loves scratches on his neck around his ear.” 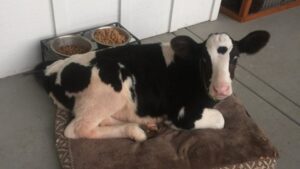 And Goliath has picked up a few tips and tricks from his canine brothers.

Though Goliath is meant to stay out of the house, the family came home one day to find Goliath happily hanging out inside.

Shaylee posted a picture to her Twitter featuring Goliath snuggled up on the family’s couch. Goliath, having watched his big brother and best friend, the Great Dane Leonidas, chill out on the couch, figured that he should also get to snooze on the comfy furniture.

“We left the door open for 5 minutes” Shaylee commented. 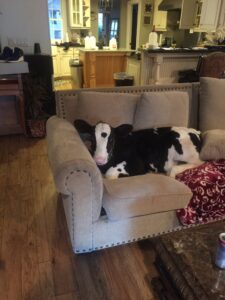 Luckily for Goliath, nobody can resist his cute face and his break-ins are met with humor and compassion: “If he comes inside we let him chill for a couple of minutes lmfao” Shaylee said in response to a comment on her post. 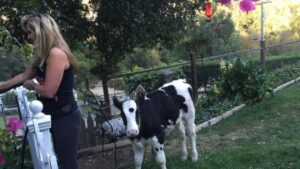 Goliath is truly living the good life now. When he first moved to the ranch, he was so tiny and weak that he couldn’t walk and the family could easily lift him, but now, he’s thriving and enjoying life on the ranch with not only his three brothers but all the other animals on the property, such as horses, alpacas and goats and he couldn’t be happier. 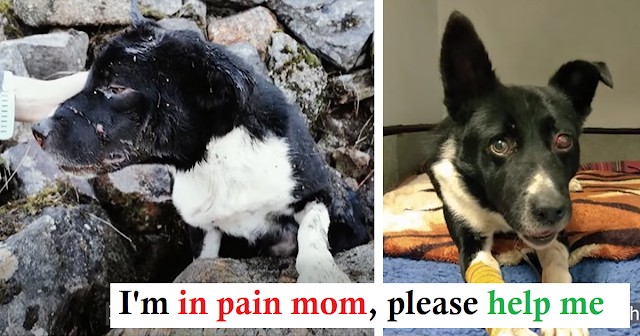 Photographer Captures One In A Million Photo, Doesn’t Realize It Until He Gets Home (6 Pics)