Most pet dogs have very happy, optimistic personalities, inspiring people with their boundless joy for life. A dog will let you know they’re feeling good by wagging their tail or jumping up to greet you.

But for one sweet little dog, all it takes is a look at his face to know he’s full of joy…

Chevy, an 9-year-old Pomeranian, has a big grin on his face all day long. His owner, Tina Marcum Denlinger, says her dog just enjoys the little things in life and always has a reason to smile.

“We’ve never seen him have a bad day. It just cracks us up,” ​​Tina told The Dodo. “Everything’s a celebration. If we go for a walk, he celebrates. If there’s food, he celebrates. He’s always so happy.”

The upbeat little dog entered Tina’s life right when she needed his smile the most: she and her husband Bart adopted him as a puppy after the death of their pet golden retriever.

“My husband and I were looking for a companion for our little female corgi mix, and found an ad in the paper,” Tina told The Epoch Times. “We first saw his smile when we went to pick him up from the veterinarian’s office after he was neutered.”

“When they carried him out and he saw my husband, he broke out into the biggest grin. Everyone in the office laughed, and couldn’t believe the smile on his face.”

Since then, Chevy has not stopped smiling. “We have never had the pleasure of owning a pupper that is full of joy continuously,” Tina told I Love Dogs. “He celebrates everything. He never walks into a room. He comes barreling in with a silly grin and spins.”

“Chevy is always happy go lucky and brings a smile larger than his own when people see him.”

According to his Instagram page, his favorite hobbies include eating bacon, riding around in a golf cart, and going on camping trips with his owners, bringing even more joy to everyone he meets.

“He rides on the golf cart and surveys the whole area,” Tina told The Dodo. “Everyone knows him …. He just gets into the cart, and he has a little harness so he doesn’t fall. And that’s his thing. It’s like he’s in a parade or something. He’s so upbeat.”

His joy for life has kept him young, and the owners say that people often mistake their senior dog for one much younger.

“Everyone thinks he’s a puppy because he’s full of energy,” Tina said. “He does what we call ‘spin dry,’ where he spins around whenever he wants something. He goes into a complete circle.”

The owners told The Dodo that Chevy’s perpetual smile occasionally goes away if he’s cold or uncomfortable, but always comes back quick — especially if he’s given some food.

Photos show him smiling year-round, sporting a number of adorable costumes and outfits.

What an adorable little dog. He definitely put a big smile on our face 😄

Pregnant Pit-Bull Sacrifices Her ‘Children’ To Protect Her Owner’s Daughter. 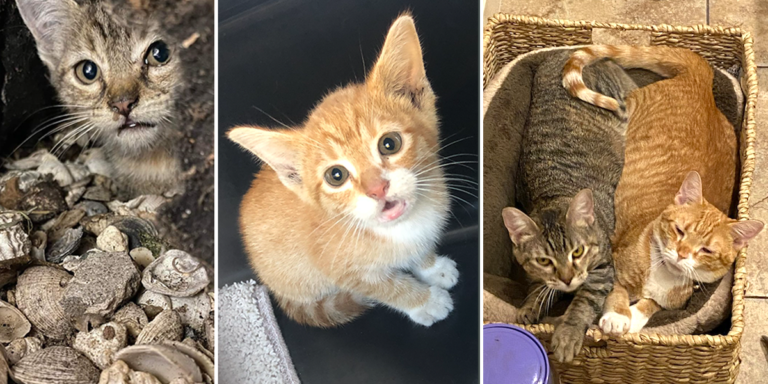 Rescued With Help From Cat Man Chris, Kittens’ Antics Bring ‘Spark’ To Home After Being Adopted Together