A stray puppy is treated like trash when he’s abandoned at a garbage dump.

All alone, a small tan puppy walks on a mountain of garbage looking for something to eat. The forlorn puppy’s cry is enough to break the hardest heart. 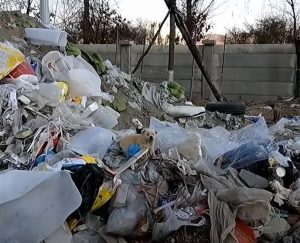 The puppy’s situation was dire and despite his cries, his mom and siblings didn’t answer him. The filthy dump was not a safe place for the puppy but fortunately, someone spotted the lonely little dog and decided to help.

The puppy is scared but seemed to know he needed help. He cried but accepted the stranger’s kindness and allowed himself to be picked up. Despite his fears, he was taken to a safer place. 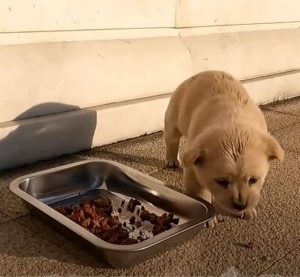 Once there, the sweet little puppy now called Hardy was fed a much-needed meal. He was truly an adorable puppy, and one must wonder how such a sweet puppy found himself in such deplorable conditions.

Because of the kindness of this stranger, Hardy was safe but also restless. He seemed to miss his family and was still searching for them. But kind hands bathed his filthy body and comforted him as best they could. 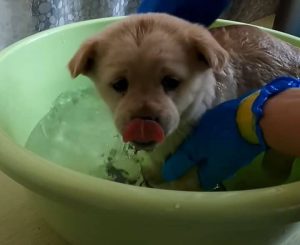 Hardy was so sweet and didn’t deserve the life he’d been dumped into. The adorable puppy should never have lived in a dump. He should have been living in a warm and loving home with a belly full of food all along. Despite this, he seemed to want to find his family.

So, after cleaning Hardy up, his rescuer decided to take a second look near the dump to see if they could find them. The puppy cried as though he knew his family was supposed to be there but sadly, no matter how hard they searched, they couldn’t find any other dogs. 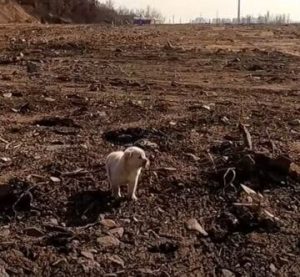 Regardless of how hard Hardy cried, he was alone except for his rescuer who saved him, who stood close by. He didn’t want to leave the area and he laid down in the dirt, refusing to leave. The poor little puppy was truly heartbroken.

But despite his pain, he was in good hands. Eventually, they did leave, and his rescuer made sure that he found a loving home. Even though he missed his mom, he eventually found comfort in his new life. 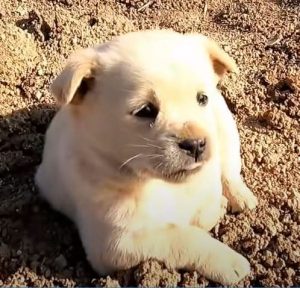