Michael McCarthy was canoeing through the Intracoastal Waterway near St. Petersburg, Florida, when he spotted the familiar flash of silver in the water ahead of him. A dolphin was swimming nearby, and she appeared to be cradling a small, limp body.

At first, McCarthy thought the dolphin had just caught her dinner, but as he watched, a heartbreaking scene unfurled before him. 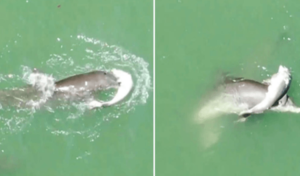 “It took me a minute to accept what I was seeing when I first spotted the dolphin,” McCarthy, the owner of the See Through Canoe Company, told The Dodo. “I wanted to believe it was a large redfish or something, but it quickly became apparent that it was a dead calf.”

McCarthy whipped out his camera and began filming the mother dolphin’s funeral procession. She nuzzled the body of her calf, caressing it in a dance of grief.

Luckily, she wasn’t alone. A fellow dolphin swam alongside her, in a seeming effort to protect and comfort his friend. “As the mother made her way north through the Intracoastal Waterway, other dolphins joined her for short distances and then went on their way,” McCarthy said, “except for one dolphin that stayed with the mother the whole time.” 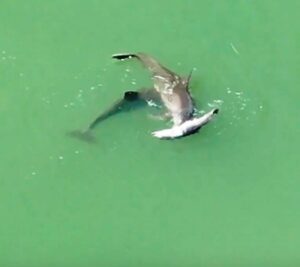 The calf appeared to be the victim of a run-in with a motorboat — something McCarthy has witnessed all too frequently. “Judging by the scar patterns on the calf it was likely hit by a boat propeller,” McCarthy said. “I’ve spent most of my life on the water and a lot of time around manatees and dolphins so, unfortunately, I’m very familiar with what propeller wounds look like.”

This made McCarthy even more determined to capture the dolphin’s grief on film, in an effort to “help raise awareness to a problem I see all the time,” he noted.

A common misconception among boaters is that dolphins are “too fast to get hit,” notes McCarthy, but that’s just not true. “The calves are even more vulnerable because they can’t swim as fast and have to surface much more frequently for air,” he added.

McCarthy posted the video to Twitter last week, and it has since been viewed over 76,000 times. 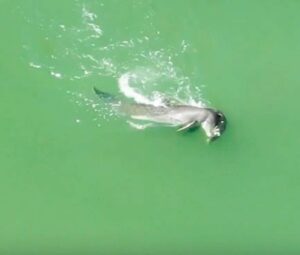 “It was really hard to watch,” McCarthy wrote on Twitter. “That image is going to be stuck in my head for a while.”