Humans and their pets often share a special bond. But the relationship between Justin Lansford and Gabe is a prime example of why dogs are considered man’s best friend.

Justin is a U.S. Army veteran. He was deployed to Afghanistan in 2012, and while he was there, he sustained a severe injury that changed his life forever. 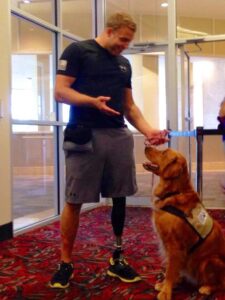 “We struck an IED and it flipped my truck completely,” Justin said. “I had bilaterally severed femurs, which resulted in the amputation of my left leg.”

During his recovery, he was introduced to the Warrior Canine Connection. This amazing nonprofit pairs service dogs with wounded veterans. Justin was, of course, matched with an adorable 2-year-old golden retriever named Gabe, and the two of them hit it off right from the start.

“Since day one, we’ve been joined to the hip,” Justin explained. “He’s there for me all day, every day.” 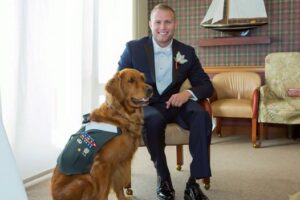 Gabe’s support has been invaluable in Justin’s recovery process. “He helps me with one thing to the next. I can use him as a stable surface to lean on, as I get to and from the ground,” he added. “I have a prosthetic lubricant to slide my leg into place in the morning and he can retrieve that.”

Their special bond is clear to others, including Justin’s now-wife Carol. Recalling the day the two of them were matched, she said, “The second Justin walked into the room when they met, Gabe was wiggling, crying, and rolling on the floor.” 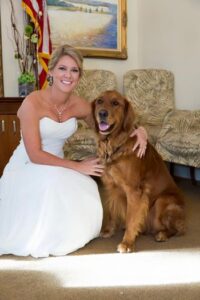 That’s why it was such an easy choice to give Gabe the most precious role when Justin and Carol got married in 2015: best man.

“He goes everywhere I go,” Justin said. “He’s certainly there to pick me up emotionally when I need it. Why would the wedding be any different?” 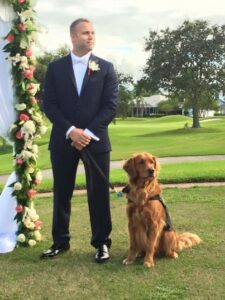 Just like any other member of a wedding party, Gabe had to look his best, so he dressed to the nines in a custom-made Army uniform! The ceremony took place in Florida in front of about 100 guests, all of whom seemed to be just as happy with Gabe’s role as Justin was.

“It was really cool to have him right by me,” Justin said. “I don’t think there was a dry eye at that point. It was a pretty steady ‘aww’ throughout the entire wedding.” 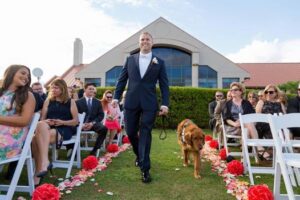 Carol couldn’t agree more. “Justin and Gabe go everywhere together and our wedding did not seem like it should be any different of an occasion,” she said. “He is a huge part of our life and deserves to share in the moment with us.” 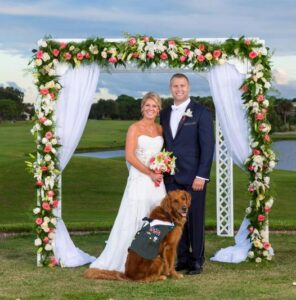 What a beautiful way to honor the dog who has gotten Justin through so much!

Don’t forget to share this precious story to make someone smile.