He stands unmistakable in his suit of brilliant blue offset by his eye-popping contrasting bright red legs. 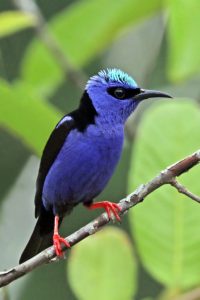 The red-legged honeycreeper (Cyanerpes cyaneus), is a small songbird species in the tanager family (Thraupidae). The male is a bright violet-blue, with a black mask surrounding his eyes, black mantle, wings, and tail. His crown is a bright turquoise, his underwings a shade of lemon yellow which is only visible in flight. He also possesses notoriously red legs. 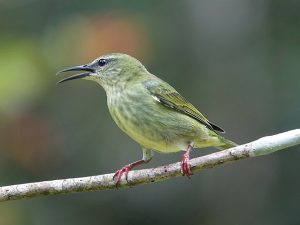 The female’s plumage is dull green above and pale yellow with faint greenish streaks below. She also has lemon yellow underwings and the slightly down-curved beak of the male.

–A delicate black jade necklace seemingly pops from a suit of intense yellow, making this stunning little bird stand out that much more!

Juvenile males are more similar to the female. 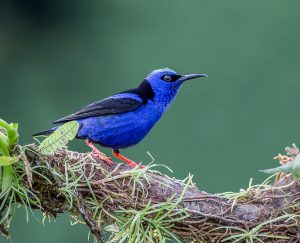 The Red-legged Honeycreeper is found from Mexico through into Central America and lowland Colombia as well as the Amazon and Orinoco Basins. There is a disjunct population in eastern Brazil. It can also be found in Cuba, where it was possibly introduced. 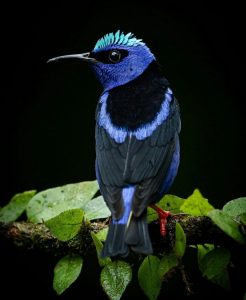 These birds enjoy living in the canopy and mid-story forests, in groups of up to 20 birds. They can also be found on forest edges, fields, and clearings with scattered trees. 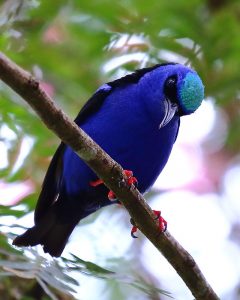 Red-legged honeycreepers like to dine on fruit, berries, and nectar from many flowers. They will also eat any insects they come across while foraging amongst the foliage. 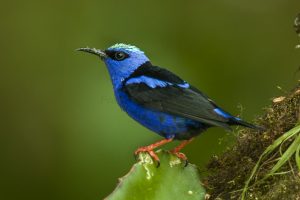 During the breeding season, in Costa Rica, this species breeds between April and June when a cup-shaped nest is built by the female in a shrub or tree about seen meters from ground level. Made from fibers the nest is attached to supporting twigs via cobwebs, two eggs are laid within. The female goes on to incubate the eggs for 12 to 13 days until they hatch. She continues to brood the hatchlings with assistance from her mate who helps feed them. The chicks are fledged after 14 days. 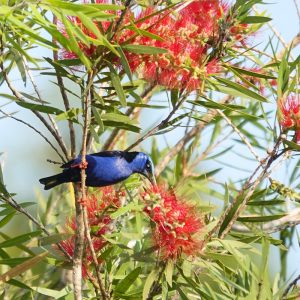 Though the global population has not been quantified, it is believed to be large as the species is described as common in many parts of its range. For this reason, Red-legged honeycreepers do not approach the level for population decline on the IUCN Red List. 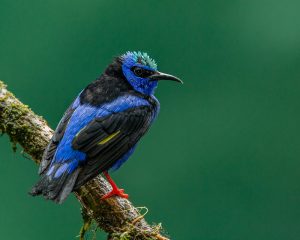 WATCH THIS BIRD RIGHT HERE IN THE VIDEO BELOW:

A Rescue Group Saves A 30-Year-Old Horse In Danger 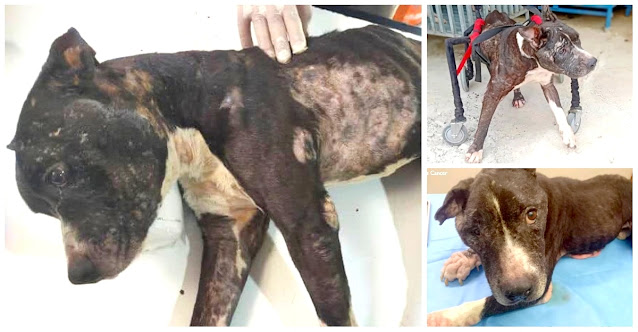 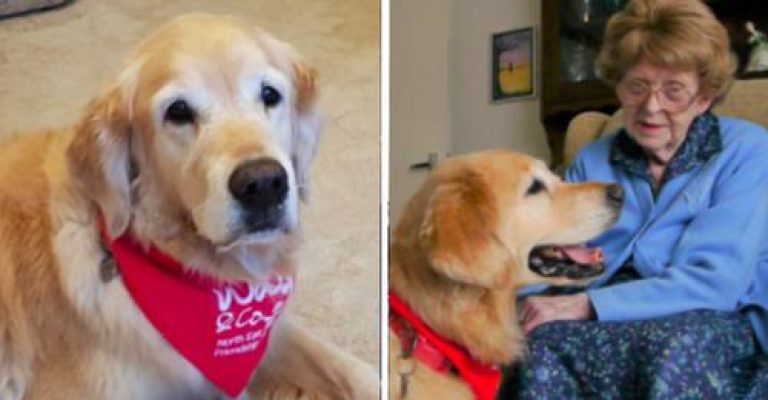